Noteworthy species of fauna in the PMA

Many of the 22 reptile and 33 amphibian species in Saint Lucia are within the PMA.  Two have been identified as endemic species.  There are 5 endemic species of birds found on the Gros Piton along with indigenous rodents, opossum, bats, reptiles and amphibians.

This variant of the Juniperus Barbadensis is endemic to the Lesser Antilles; now extinct in Barbados and only existing in Saint    Lucia.

In   1985, This comfier was re-discovered with the lone location being near the summit of  Petit  Piton. A  recent survey revealed fewer than 50 plants within a single population and occupying an area of only  0.0006km 2.  The variant is therefore critically endangered (2013).

The small population which exists is threatened by wildfire, hurricanes and insects.

A shrub which thrives in a tiny area within the open, rocky, dry summit of Petit Piton and has not been observed elsewhere.

Given its small population, and unless new plantings are established, it is under threat of extinction. This shrub is endemic to Saint Lucia. 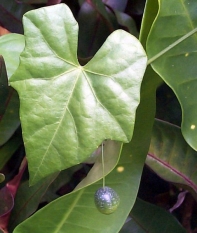 A rare indigenous tree which occupies the lower montane and montane rainforests and Gros Piton (Saint Lucia).  It is used for home remedies and general construction and is found in Central America, Columbia, Venezuela, Peru, northeast Brazil, the Lesser Antilles, Puerto Rico and Jamaica.  This tree produces a hardwood of fine texture that is durable and resistant to fungal attack and termites.

This is an indigenous and rare woody vine which inhabits semi-evergreen seasonal forest and lower montane rainforest, including disturbed areas.  It is found on the upper slopes of the  Pitons and is Native to Puerto Rico, Lesser Antilles (Dominica, Guadeloupe, Martinique, Saint Lucia, Saint Vincent), Mexico, Central America and South America 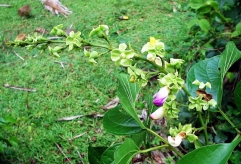 An indigenous and quite rare tree which thrives in deciduous seasonal forest on rocky coastal hills.  It is found in the Windward and Leeward Islands and North and Mesoamerica.

This is an indigenous rare tree found in deciduous and semievergreen seasonal  forest, especially semiopen spots.  It is most common in Soufriere (Saint Lucia) and several of the Leeward and Windward islands, the Greater Antilles and Meso and South America.  Its bitter bark contains quassia used in commercial medicines.

An indigenous quite rare shrub of deciduous seasonal forest, especially shady gulleys.  It exists in the Caribbean Islands from Martinique due south to Grenada, Meso and South    America.  The plant lacks spines at branch tips in Saint Lucia.  It is endemic to the West Indies; native to Puerto Rico, Virgin Islands (Saint John, Saint Thomas, Tortola, Virgin Gorda), and Lesser   Antilles (Anguilla and Saint Barthelmey). 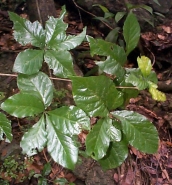